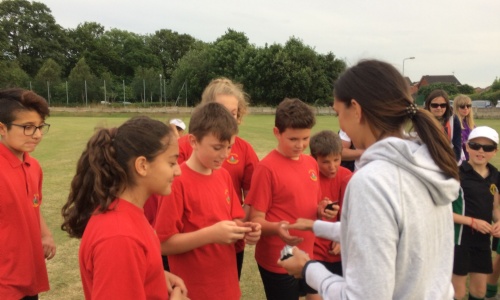 Our last tournament of the year took place tonight and I couldn't be more proud of our Class 4 sportsmen and women.  16 children represented the school in a Kwik Cricket tournament at Trentside in Branston and were all outstanding in the way they played, encouraged each other and represented the school.  Rangemore 1 won both of their group matches topping their section and narrowly missing out on a place in the semi finals (as the other group winners had scored more runs) and playing brilliantly with some really supportive fielding performances.

Rangemore 2 won all three of their group matches to make the semi final stage.  Facing Thomas Russell 2 in this match was tricky and tight, with the final result coming down to the very last ball, where Rangemore just prevailed by one run.

Achieving a place in the final, from the 14 teams who began the competition, was a feat in itself. Thomas Russell's first team were our opposition and they proved just too strong, winning by 13 runs. Throughout the event there were excellent performances with the bat (Uzair and Saami hitting huge 6's, Honour and Leyla both reaching the boundary too), the ball (great bowling from the whole team with accuracy and wickets aplenty) and in the field (great wicket keeping from Matt, backing up from Arthur and athletic catches from Lewis, Andrew and Lewis).  Support from parents and families was excellent - as always - and it was a pleasure for Mr Meir and me to accompany you.  Well done.