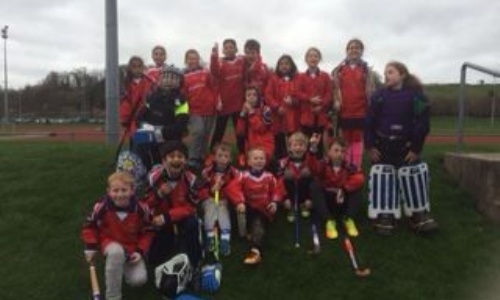 After a disaster with the bus (20+mins late) and the very real prospect of forfeiting our first game Mrs Evans and Mrs Young stepped in to save the day, driving one of our teams down there  to make it just in time for the match.

Both teams eventually made it and were faced with the prospect of playing the x18 teams from local schools which entered.  Even though it was cold and blustery, spirits remained high and the children were a real credit throughout the afternoon.  Mrs Wycherley had one team and Mr Meir the other, acting as coach and controlling substitutions.  The teams consisted of a mix of boys and girls with two girls to be on the pitch at all times.  As the afternoon progressed our support from parents grew and this really helped motivate the children, many thanks to all those who came down.  Mrs Wycherley’s team  played fantastically going all the way through until the quarter finals – a fantastic achievement.

Mr Meir’s Team went all the way! They battled through all games scoring plenty of fantastic goals with strong defensive play and above all a great team spirit.  This spirit carried us through all early rounds, quarter final, semi final and the final.  There were plenty of close games against much bigger schools than ourselves with some games having to be decided on penalty strokes.  The team stuck together during these tense penalty situations with some fine goalkeeping from Joel whilst the rest of the children decided upon their own penalty takers and order of play.  The team played with skill and guile and won the final and indeed the whole competition! The children along with parents were invited inside out of the wind and now rain to receive congratulations and the trophy, what a super achievement.