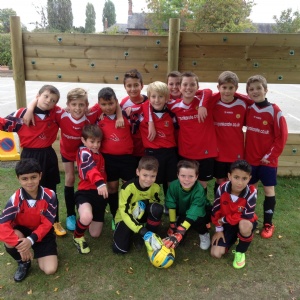 On the 3rd October our 2 Rangemore football teams  took part in the Dove Valley 6-aside tournament. Our a team had the group where we played other schools B and C teams. Throughout the group stages we drew 1 and won 3 which put us top of the group.  Goals were scored by Matt and Sam. Our B team played against Shobnall, Thomas Russell and William Shrewsbury A teams. We beet Shobnall 1-0 with the goal coming from Harry. Unfortunately we lost the other 2 games. Both teams were fantastic throughout the group stages and played really well as a team.

Our A team managed to go through to the semi final. We played John of Rolleston B in the game which unfortunately we lost 2-0. Well done to all of the children who took part and thank you to the parents for your support.

Please enter some content for your news story here.