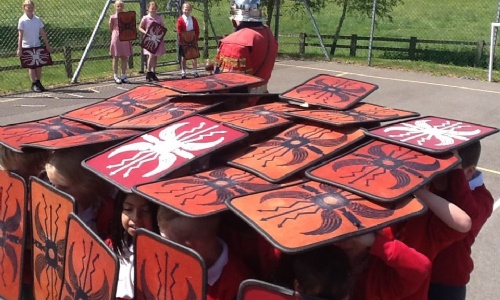 Class 3 enjoyed a fun and learning filled Romans day led by Titus AKA Murray.  This special learning was part of our topic on ancient civilisations and specific to our history studies.  First, Titus showed us how to put on the armour of a Roman Soldier which included chain-mail and plated armour.  Various class members tried on the armour which we tested against real weapons.  Some of the things Titus showed us were disgusting and made us laugh – a bit like ‘horrible histories’.  We enjoyed being led out in formation as Legionnaires and took part in battlefield training with plenty of full blooded war chants.  Titus showed us why the Romans were so successful in battle as we tried out the ‘turtle’ formation which protected us from Mr Meir’s ‘rocks’ and ‘boiling oil’.  We had a great time learning about the Romans and Titus helped to bring it all to life…and so we march sin dex, sin dex, sin dex.  Valete from class 3.